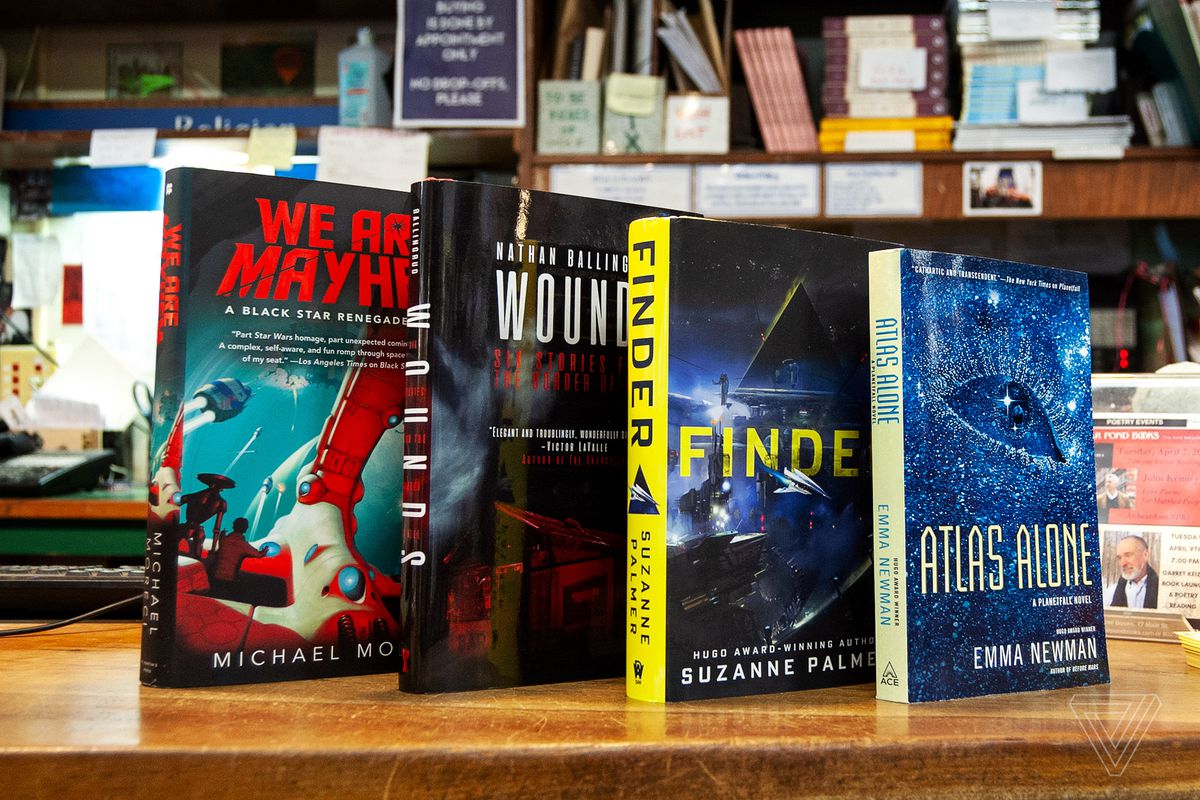 If you haven’t guessed by now, I like reading a great deal. But in addition to just enjoying the practice itself, I’m generally fascinated by books about books, whether it’s the history of reading and how that evolved over time or related topics, like the one recounted in Travis McDade’s recent book Torn from Their Bindings: A Story of Art, Science, and the Pillaging of American University Libraries.

The book is about a rash of thefts from university libraries at the hands of a man named Robert Kindred. In the 1970s, he realized that there was a booming market for home decor and artwork, particularly the antique-looking illustrations from books. He realized that he could pick up books like Birds of America or Picturesque America cheaply, by cutting out the wood and steel engravings and selling them separately, and make a tidy profit. However, as the cheaper supply of books dwindled, he picked up another target: university libraries, which held thousands of rare books across the country and weren’t really well-guarded. It’s a gripping read, and it serves as a fascinating look into not only the world of rare books but also the work of the artists and engravers who were frequently targeted.

Here are 13 new science fiction and fantasy novels that are coming out in the first half of April. Check back later this month for another list of books that are due out in the second half of the month.

Linda Nagata impressed us a couple of years ago with her self-published novel The Last Good Man, a thriller that imagined the very near future of warfare. Her latest novel is a return to a world she created in a series of books called the Nanotech Succession (The Bohr Maker, Deception Well, and Vast), hard SF thrillers about humanity’s expansion into space. In this new book, humanity has been attacked by robotic alien ships, and the core human worlds near Earth have fallen. An explorer named Urban embarks on an expedition back into human space from humanity’s last colony on Deception Well to figure out what went wrong. Publishers Weekly says that the book is an “in-depth tour of a far-future cosmos will appeal to setting-oriented hard SF readers.”

A couple of years ago, I picked up a collection of short horror stories by Nathan Ballingrud called North American Lake Monsters, and I was blown away by his characters and how they react to terrifying violence or supernatural events. Ballingrud has a new collection out this month called Wounds. It includes his story The Visible Filth, which is the basis of an upcoming horror film about a bartender who’s plunged into a nightmare after finding a strange phone at work.

Other stories follow a book thief who is sent to locate a book that contains the locations of various artifacts from hell, a ship of occultists, a city lost to supernatural creatures, and more. Publishers Weekly gave the book a starred review, saying that it’s full of “skillfully created, deeply disturbing stories in this collection of the uncanny.”

Last year, Suzanne Palmer earned the prestigious Hugo Award for her novelette The Secret Life of Bots, and she will publish her debut novel this month. It’s about a professional repo man named Fergus Ferguson who is hired to steal a spaceship from a local merchant boss. When he locates the ship on a distant colony world named Cernee, war erupts, and Ferguson has to navigate the conflict and save the locals who he’s become fond of. Kirkus Reviews says that the book is a “nonstop SF thrill ride until the very last page.”

The Luminous Dead by Caitlin Starling

On a distant planet, a caver named Gyre Price lies to join a team on a dangerous expedition to map out mineral deposits on a mining world, hoping to earn a big paycheck for her trouble. She has to deal with a handler named Em who knows her secrets and isn’t afraid to use them to control and manipulate her. As the team goes further underground, Gyre has to deal with cave collapses and paranoia as well as strange things that seem to be following them in the dark. Publishers Weekly gave the book a starred review, saying that it’s a “claustrophobic, horror-leaning tour de force is highly recommended for fans of Jeff VanderMeer’s Annihilation and Andy Weir’s The Martian.”

We Are Mayhem by Michael Moreci

Michael Moreci’s debut last year was a pleasant surprise — a rollicking space opera / loving homage to Star Wars, in which we met Cade Sura, a reluctant hero who’s pulled into an intergalactic war. Moreci’s follow-up is We Are Mayhem. It continues the adventures of Cade and his fellow Black Star Renegades, who destroyed the Praxis Kingdom’s massive warship, War Hammer. After that strike, the Praxis have doubled down on their tyrannical rule across the galaxy, and Cade and his companions are leading a resistance against them. But to defeat them, Cade has to figure out the origins of a mythical weapon in order to figure out how to use it. Moreci told The Verge that where the first book was a coming-of-age story, this one is about accepting responsibility and fighting for justice.

Fran Wilde’s latest novel follows two children, Eleanor and Mary, who live in a chaotic household, protected by a sort of house magic that keeps them safe. But when their violent father breaks a precious family heirloom, the two girls discover a river under their bed that sweeps them into a fantastical world. Publishers Weekly says that “Wilde skillfully blurs the lines of fantasy and reality in a haunting middle grade story of sisters connected through trauma and a shared mythology.”

Described as “Master and Commander in space,” Bennett R. Coles’ new novel follows the crew of a starship, the HMSS Daring, as they travel through a dense star cluster on solar sails, searching for pirates. Liam Blackwood is the ship’s second-in-command, and he has to figure out how to keep the crew from mutinying after their new captain makes a series of strange choices that threaten their mission. Kirkus Reviews says that “traditional science fiction lovers may get distracted looking for more space tech, but lovers of classic high-seas adventures and those who enjoy genre-bending SF will find this swashbuckling space adventure a worthy read.”

No Country for Old Gnomes by Delilah S. Dawson and Kevin Hearne

Last year, Delilah S. Dawson and Kevin Hearne published their first collaboration, Kill The Farmboy, a comedic take on epic fantasy. A war is brewing between the impeccably neat gnomes and war alpaca-riding halflings. Offi Numminen is an outsider in the gnome community who becomes the unlikely leader in a band of misfits on a quest to confront the villain instigating the war. Publishers Weekly says that “Hearne and Dawson both uphold and subvert fantasy’s classic elements, with some blatant Tolkien riffs.”

Amnesty is the third installment of Lara Elena Donnelly’s Amberlough Dossier series, a spy thriller set in an art deco-styled fantasy world. The first installment of the series, Amberlough,earned her a Nebula nomination last year, and in this latest installment, a traitor has returned to Amberlough City in the aftermath of a revolution that ousted the fascist One State Party.

But former agent Cyril DePaul has to deal with the collaborators he wronged under the party’s rule, and warring political parties are looking at him as a potential scapegoat. Booklist Online says that it’s a “fitting finale for the series; the experience of reading it is somewhat like watching an elegant train wreck in progress and wondering if there will be any survivors.”

2019 marks the 20th anniversary of Episode 1: The Phantom Menace, and in conjunction with the anniversary, the next Star Wars novel will follow the adventures of Qui-Gon Jinn and his Padawan Obi-Wan Kenobi. Kenobi has trouble with his enigmatic Jedi Master who seems bent on ignoring the order’s rules and obsessed with ancient prophecies. When they’re called to a planet to help another Jedi Knight mediate a political dispute, they find more than they bargained for, testing their bond as master and apprentice.

In Greg Egan’s latest science fiction thriller, a binary black hole called Taraxippus is about to enter the solar system, prompting Matt Fleming and his companions to plan for the impact that it might have on Earth, boarding an aquaculture rig and stocking up on supplies to ride it out. When Taraxippus enters the system, it has a drastic effect on Earth’s orbit, changing the Earth’s climate forever, and forcing Matt to try and survive in the new world.

Publishers Weekly says, “Egan’s rapid-fire plot, full of convincing scientific detail, and his sympathetically drawn characters of various races and backgrounds make this a vivid commentary both on societies’ stubborn refusal to face an environmental threat and individuals’ determination to survive it.”

Nest of the Monarch by Kay Kenyon

Kay Kenyon continues her Dark Talents series with Nest of the Monarch, which is set in an alternate world of magic in the 1930s in the lead-up to the Second World War. Kim Tavistock has the ability to get people to tell her their secrets, and she’s dispatched to continental Europe on a mission for Britain’s intelligence service. Going undercover as the wife to one of the country’s diplomats, she searches for details about a secret Nazi mission called Monarch.

When Kim befriends a member of the Jewish resistance, she finds a larger conspiracy and discovers that Monarch is an attempt to imbue soldiers with horrifying talents. She then races to stop their deployment into the rest of Europe. Publishers Weekly says that the bookhas a “rich cast of diverse characters and near-catastrophic escapes amid searing prewar tensions keep the pages of this outstanding historical fantasy turning.”

Atlas Alone is the latest standalone installment of Emma Newman’s interconnected Planetfallseries, which is set on a distant world. Earth has been destroyed, and protagonist Dee is six months into a journey to another world, using an immersive gaming system to escape her trauma and rage while hunting down the perpetrators.

The system is convincingly real, and she’s disturbed when she finds that a fellow player died at the same time she killed someone in the game. As she hunts for answers, she discovers the true plans for their future colony, and she has to take drastic action to save the rest of humanity. Publishers Weekly gave the book a starred review, saying that the “winning combination of intriguing mystery and inventive SF richly rewards Newman’s longtime readers and will lure others to the series.”