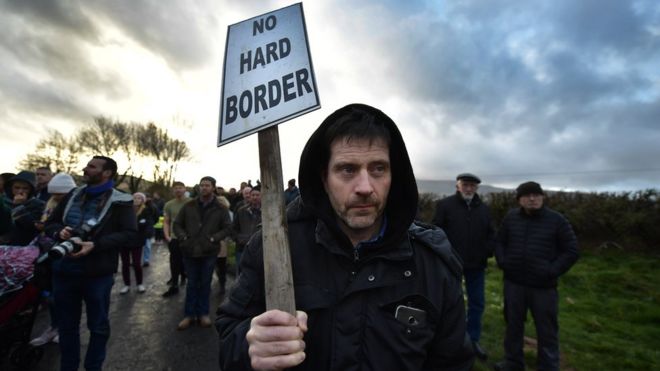 The Alternative Arrangements Working Group, with Leave and Remain MPs, will meet for the first time on Monday after the Commons voted to find another way of avoiding a hard Irish border.

The Irish PM said the UK was reviewing ideas that had “already been rejected”.

The backstop is an insurance policy – designed to avoid a hard border “under all circumstances” between Northern Ireland and the Irish Republic.

Leo Varadkar told RTE radio it was “very frustrating” the UK government was “going back to the idea of technology”.

The UK is due to leave the EU at 23:00 GMT on Friday 29 March, when the two-year time limit on withdrawal negotiations enforced by the Article 50 process expires.

A number of cabinet ministers have indicated they would be willing to agree to a short extension to finalise legislation for Brexit, including Justice Secretary David Gauke.

What is the working group?

Number 10 said the working group of Conservative MPs was set up following “significant support” for the so-called “Malthouse Compromise” – named after housing minister Kit Malthouse who encouraged talks between different groups of MPs.

Engineered by both Leavers and Remainers, the proposal includes extending the transition period for a year until the end of 2021 and protecting EU citizens’ rights, instead of using the backstop.

Mr Fysh said the group had spoken to the EU and it was “very open” to the proposals, adding that they were not based on new technology.

He told BBC Radio 4’s Today programme: “These are proposals that have not been discussed in the negotiations yet. The UK government has not properly looked at these proposals either.”

The working group will also hold meetings on Tuesday and Wednesday.

Mr Gauke said he welcomed “parliamentary colleagues trying to be constructive [and] trying to find a way to meet the competing objectives”.

He added: “I know this working group are going to be working with officials to examine and test these arguments to see if there is anything we can pursue. We need to do that work and then proceed with an approach that can deliver.”

Deadlock remains. Brexit is just over seven weeks away. So the government is thrashing around for a solution.

The government’s willingness to provide civil service support from Number 10, HMRC and the Cabinet Office to this group of Conservative MPs is an indication of how seriously Downing Street is treating their idea.

But it is also still attempting to salvage the current blueprint, or a variation of it. Attorney General Geoffrey Cox – the government’s most senior lawyer – is examining the legal changes to the backstop that could be requested.

The bottom line is this: the government knows it has to return to Brussels with something to ask for. And the prime minister could be back there by the end of the week. So they need to come up with something, and quick.

What is the backstop?

The backstop is an “insurance policy” – designed to avoid a hard border “under all circumstances” between Northern Ireland and the Irish Republic.

Under the current Brexit deal, the 310-mile Irish border would become the only land border between the EU and the UK.

This would probably mean checks on goods crossing it, unless both sides could reach a comprehensive trade deal.

If such an agreement could not be reached, then to avoid those checks and border posts or other infrastructure, the backstop would come into force.

It would keep the UK in a “single customs territory” with the EU and leave Northern Ireland effectively in the EU’s single market for goods.

A number of MPs fear the UK could be “trapped” in this arrangement for years, leaving it unable to strike its own trade deals on goods with the rest of the world.

What “alternative arrangements” are there?

Alternatives to the backstop that the prime minister has said she wants to discuss with EU leaders include:

Mr Javid told the BBC’s Andrew Marr Show that an alternative arrangement to the Irish backstop “can be done” using “existing technology”.

He said: “I asked Border Force months ago to advise me to look at what alternative arrangements are possible and they’ve shown me quite clearly you can have no hard border on the island of Ireland and you can use existing technology – that is perfectly possible.

“The only thing that’s missing is a bit of goodwill on the EU side.”

He said the attorney general was “leading on another strand of work” – looking at whether a “hard time limit or proper exit mechanism” was possible.

She tweeted: “That would not be ‘goodwill’ but a dereliction of duty by public authorities in the EU that have a duty to ensure public health and safety of consumers, protect against unfair competition and enforce public policies and international agreements.”

Apple Isn’t Disrupting Banks, It Is Helping Them