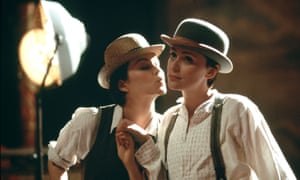 Coming out is one of the most daunting things a queer person will have to do. My parents are very liberal, but I still felt sick when, aged 25, I realised I had to tell them I was a lesbian: it felt like too much information, as though I was announcing I liked it from behind. This was just the last in a series of comings-out. When I was 12, my friends read my diary and realised I had a crush on another girl. Soon afterwards, an actual boy kissed me on the cheek at his bar mitzvah and everyone forgot about the girl. Aged 14, I told a few people I was gay, but then I developed a crush on Eddie Izzard and decided I was bisexual. Finding another woman to be bisexual with seemed like a lot of effort, though, so I pretty much forgot about fancying women until I was in my 20s.

Coming out never happens just once. First you have to acknowledge your sexuality or gender identity to yourself. Then you might tell your friends and family, add a rainbow flag to your Twitter bio, ostentatiously read Sarah Waters novels on the train, that sort of thing. But it doesn’t end there. You’ll come out over and over again for the rest of your life – to the new guy at work who asks whether you’re married, to the family friend who assumes “partner” means “business associate”, and to the estate agent who thinks your wife is your daughter. (This has happened to me twice. Twice.)

To me, being queer is an absolute gift, and that’s reflected in my novel, In at the Deep End. It tells the story of Julia, who comes out in her mid-20s and is thrilled when she realises that queer culture is her culture – Dusty Springfield, But I’m a Cheerleader, the colour pink, vegan food, all the best things – and throws herself into the life with gay abandon.

Of course, the fight for LGBTQ equality is far from over, and being openly queer is a privilege that millions of people around the world don’t enjoy, but I wanted to celebrate the sheer joy of finding your community and figuring out who you are.

Here, in no particular order, are 10 very good books about coming out.

1. The Times I Knew I Was Gay by Eleanor Crewes
In this charming, funny comic, Crewes traces the moments she realised she might be gay, from her holy communion to her first date with a woman. She describes the “burst of life” she feels when she comes out once and for all – and the regret that it has taken her so long.

2. Tipping the Velvet by Sarah Waters
Waters’ first novel, set in the 1890s, follows Nan King as she goes from naive Whistable oyster-girl to music-hall star to London rent boy to openly lesbian “tom”. Nan’s coming out is gradual: she falls for male impersonator Kitty Butler as soon as she sees her on stage, but quickly realises she has to keep her feelings to herself. By the end of the novel, though, she embraces her sexuality. She takes her lover’s hand in public, “and – careless of whether anybody watched or not – I leaned in and kissed her”.

3. Moab Is My Washpot by Stephen Fry
When I was 17, I fell horribly in love with a girl I’d never spoken to. Then I read Fry’s description of falling in love in the same way, and I felt much less alone. I underlined the passage in pencil, the way teenagers do: “How can it be that just the gait of him, the stand of him, the shape and turn away of him, can be enough for me to know and to know at once?… I wrote it down that first afternoon. I love Matthew Osborne. I instinctively knew this meant that everything was changed.”

4. Under the Udala Trees by Chinelo Okparanta
This debut novel tells the story of Ijeoma, who falls in love with another girl, Amina, during the Nigerian civil war. In Nigeria, anyone found guilty of having a same-sex relationship – or “supporting” a same-sex relationship – can be sentenced to 14 years in prison. In the northern states, the punishment is death by stoning. In her author’s note, Okparanta writes: “This novel attempts to give Nigeria’s marginalised LGBTQ citizens a more powerful voice, and a place in our nation’s history.”

5. More Tales of the City by Armistead Maupin
This features one of the most iconic comings-out in queer literature: Michael Tolliver’s Letter to Mama. “If you and Papa are responsible for the way I am, then I thank you with all my heart, for it’s the light and joy of my life,” he writes. The fictional letter helped Maupin come out to his own parents – he knew they would read it and realise. Eventually he received a reply from his father: “Dear Teddy, As you know, your mother is very ill, so any additional stress can only exacerbate the situation.”

6. Trans: A Memoir by Juliet Jacques
This book grew out of Jacques’ Guardian column, A Transgender Journey, which documented her gender reassignment. Juliet comes out again and again, as she navigates her identity and the evolving language around gender identities. Some of the most touching passages are about Juliet’s relationship with her mother. Shortly after her surgery, they go bra shopping together, and Juliet’s mum refers to her as “my daughter” in public. Jacques writes: “Now I could see that she understood my transition as a process in which far more had been gained than lost.”

7. When Katie Met Cassidy by Camille Perri
Everything I’ve ever wanted in a Hollywood romcom, in book form. One of the “leads” is a gender non-conforming lesbian and the other is a outdoorsy girl from Kentucky who has never even considered dating another woman. Of course, it’s Katie from Kentucky who comes out during the story. At first she’s embarrassed to be seen with another woman in public, but she overcomes her shame – and like all good lesbians, Katie and Cassidy declare their love for each other 10 days after meeting.

8. Fun Home by Alison Bechdel
Bechdel won a MacArthur “genius grant” for her pioneering graphic novel, which focuses on her difficult relationship with her father. Just four months after Alison came out as a lesbian – and her father admitted to having affairs with men – he killed himself. “With my father’s death following so hard on the heels of this doleful coming-out party,” she writes, “I could not help assume a cause-and-effect relationship.”

9. Giovanni’s Room by James Baldwin
Baldwin wrote this novel in the early 1950s, so it’s not surprising that it falls into the “being queer can lead to tragedy” category of LGBTQ fiction. David, the protagonist, doesn’t want to come out, to himself or anyone else. He proposes to his girlfriend, Hella, but then starts an affair with Giovanni, a young Italian waiter. At the end of the novel, when Hella discovers David with a sailor, he tells her: “I wasn’t lying to you … I was lying to myself.”

10. Death in the Spotlight by Robin Stevens
The seventh book in Stevens’ bestselling Murder Most Unladylike series, aimed at children aged 9-14. When an actress is murdered at a London theatre, amateur detectives Daisy and Hazel vow to find the culprit – but then Daisy falls for one of the suspects. The suspect happens to be a woman, and Daisy happens to be one of the best-loved characters in contemporary children’s literature. I am so glad this book exists: Daisy is a queer heroine children will look up to, and Hazel is a brilliant role model for young allies. When Daisy tells her she likes girls, Hazel says: “You’re my best friend and nothing you can do can change that.”

• In at the Deep End by Kate Davies is published by HarperCollins, priced £12.99. To order a copy, go to guardianbookshop.com. Free UK p&p on orders over £15.

… and we’d like to explain why. Our journalism now reaches record numbers around the world and more than a million people have supported our reporting. We continue to face financial challenges but, unlike many news organisations, we haven’t put up a paywall. We want our journalism to remain accessible to all, regardless of where they live or what they can afford.

This is The Guardian’s model for open, independent journalism: free for those who can’t afford it, supported by those who can. Readers’ support powers our work, safeguarding our essential editorial independence. This means the responsibility of protecting independent journalism is shared, enabling us all to feel empowered to bring about real change in the world. Your support gives Guardian journalists the time, space and freedom to report with tenacity and rigour, to shed light where others won’t. It emboldens us to challenge authority and question the status quo. And by keeping all of our journalism free and open to all, we can foster inclusivity, diversity, make space for debate, inspire conversation – so more people have access to accurate information with integrity at its heart.

Guardian journalism is rooted in facts with a progressive perspective on the world. We are editorially independent, meaning we set our own agenda. Our journalism is free from commercial bias and not influenced by billionaire owners, politicians or shareholders. No one steers our opinion. At a time when there are so few sources of information you can really trust, this is vital as it enables us to give a voice to those less heard, challenge the powerful and hold them to account. Your support means we can keep investigating and exploring the critical issues of our time.

Our model allows people to support us in a way that works for them. Every time a reader like you makes a contribution to The Guardian, no matter how big or small, it goes directly into funding our journalism. But we need to build on this support for the years ahead.