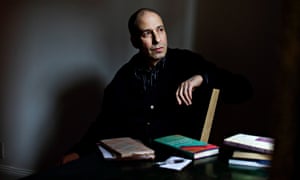 James Lasdun is a novelist, short-story writer, poet and film-maker. With Jonathan Nossiter, he co-wrote the films Sunday (1997) – which won the grand jury prize and the Waldo Salt screenwriting award at Sundance – and Signs & Wonders (2000), starring Charlotte Rampling and Stellan Skarsgård. He was born in the UK – the son of architect Sir Denys Lasdun – but now lives and works in the US. He spoke to me from his home in the hills of upstate New York. His latest book, Victory, comprises two novellas – Feathered Gloryand Afternoon of a Faun, both darkly humorous and compelling portraits of men wrestling with guilt and desire.

Afternoon of a Faun is about a historical act coming to light years later. It feels very much a novel of our times. Was this intentional?
I didn’t write it as a #MeToo novel. I started it at the very beginning of 2017. Trump had been elected, then I was nearly finishing it as the Harvey Weinstein story broke and #MeToo started. I was totally caught off my guard. I didn’t really see that coming and it was a little complicated for me. I could see in an opportunistic way that it connected very strongly… but it was sort of an accident.

It called to mind another great short novel – JM Coetzee’s Disgrace.
I’ve read Disgrace; it’s an amazing novel. The story of sexual misconduct, of allegations – it’s become a trope. So I’m sure it had an effect on me, but so did many other novels, real-life stories, plays. Writers are really drawn to that subject for obvious reasons. It’s of great interest to me and this isn’t the first time I’ve written about it. I wrote about it in my first novel, The Horned Man.

I wanted to get a lot of the different aspects of male behaviour down, not just the toxic elements

The first story, Feathered Glory, is, among other things, about an injured bird.
We took in a swan at one point. My wife was working with a wildlife rehabilitator. I can’t remember exactly how it came about, but I had a swan in a cage in the room that I was writing in. It was with us not a very long time, but it was a very powerful presence and I knew that one way or another I wanted to write about it.

These are stories about toxic masculinity, but they’re also about male friendship.
I think male friendships are quite fascinating. I have very longstanding friendships with other men. Especially after you get married, you tend to conduct most of your close relationships outside of marriage with guys. I didn’t want to write a satire of bad behaviours – I wanted it to get a lot of the different aspects of male behaviour down, not just the toxic elements. But that’s a part of it, it’s what drives the story. Different things seem toxic at different times, too; they’re both stories that go over long-ish time periods in which social values shift and I wanted to capture a little bit of that.

In the 2013 memoir, Give Me Everything You Have, you wrote – in a mannerthat stirred some controversy – about your experience of being stalked by a former student. I wondered how much that experience fed into these stories?
I’d been writing versions of that kind of narrative, of devastating interruption of a relatively stable life, before my whole stalker thing. In a strange way that episode fell into a pattern of things that was already part of my imaging. There were all these sorts of very bizarre resemblances between what happened with my stalker and what I’d written in The Horned Man several years before. So it wasn’t like this introduced me to a whole new emotional spectrum, but it did give me a horrific amount of psychic material to work with. It certainly made writing this kind of a story possible, perhaps inevitable.

You write poems, prose, short stories, screenplays. In which medium do you feel most comfortable?
I just think of myself as a writer. At various different times different forms have appealed more or less. I haven’t been reading or writing poetry for a while, I’m not sure why. I used to be able to do both at once and around about the time we had kids, something had to give. I don’t feel terribly engaged with poetry at the moment. I hope that changes.

Did the novella as a form particularly appeal to you? There seems to be something of a vogue at the moment for these shorter books.
I do like short novels or novellas – I don’t really know what the difference is. Some of my favourite pieces of writing are classic novellas by Tolstoy or Melville or Henry James. They’re very satisfying. They have the richness and depth of novels but the tightness of short stories. I’m quite an impatient reader. I don’t read very many long books.

What book is currently on your bedside table?
A book about ancient Egypt called The Mind of Egypt by Jan Assmann.

What was the last great book you read?
I was knocked out by Sally Rooney’s Conversations With Friends. I haven’t read the new one but I’m looking forward to it. It hasn’t come out here yet.

What book would you give to a young person?
My son just loved Tintin. But also The Count of Monte Cristo.

Which classic book have you recently read for the first time?
I’m doing a lot of rereading at the moment, much of it listening on audiobooks. I drive a lot and love listening to big books on tape. I’d never got through The Devils by Dostoevsky, which I’d tried to read maybe half a dozen times but never got there. I had to do a lot of driving – I was driving my son to Ohio where he goes to college – and I listened to it and it blew my mind.

Which book do you always come back to?
Anna Karenina. Partly it’s the unfussy clarity of the style that gives you the feeling of looking straight at life without any interposing screen of words, and partly, it’s the endlessly fascinating methods by which it organises its vast mass of materials into a coherent narrative, in which every tiny detail manages to be both luminous in itself and part of some transcendent vision of reality.

Which is the book you’re looking forward to reading next?
The third part of the Rachel Cusk trilogy [Kudos]. I’ve always admired her powers of observation and her amazingly lucid prose, but this project does things with concealment and disclosure that I’ve never seen before, and that seem to open up new possibilities for the novel itself as a literary form.