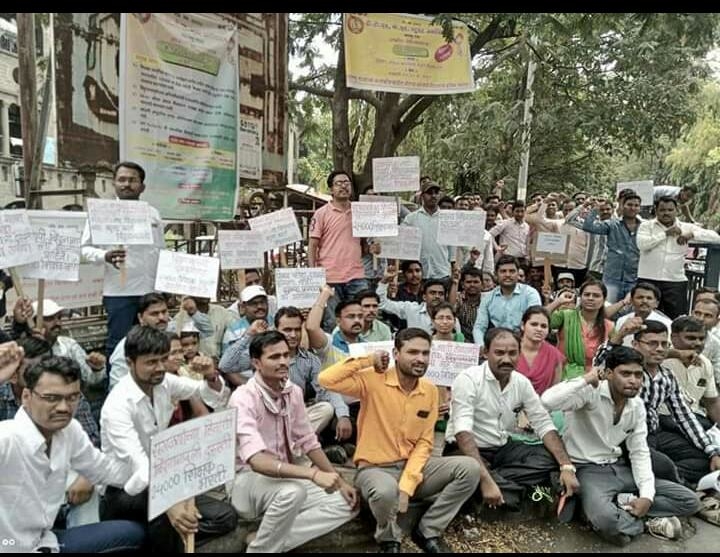 May 2018 Protest at Directorate of Primary Education office

Ramesh Thorat obtained a D.Ed. (diploma in education) in 2011. He is from Chinchpur village of Paranda Tehsil, Osmanabad district of Marathwada region. He aspired to be a teacher in either private or public schools in Maharashtra. However, he has been unemployed for last seven years, and remains frustrated.

“I am the eldest of the three brothers. I have to take responsibility of them as well as of my parents. But what can I do? I keep striving for the recruitment all the time,” he said. His parents are looking for a match for his marriage. “Who would marry an unemployed man? We feel that we have been cheated by the government.”

This is not the story of just Ramesh Thorat, but of about 1,78,000 ‘teachers in waiting’ in Maharashtra. While ‘jobs’ continues to be merely an electoral bait for the political parties and subsequent governments, stories of struggle of thousands like Thorat give us a real sense of ground reality—of how these young girls and boys are being tortured and misled by the system right from the beginning.

The last major recruitment of teachers in government and semi-government schools of Maharashtra – with 15,600 appointments – took place in 2010. Since then, the recruitment has stopped owing to a number of reasons. One of the crucial reasons behind this was the ‘bogus recruitment scam’ that had come to light around the same time. Various aided and semi-aided schools had reportedly showed ‘bogus’ classes, and had hiked the number of students to get more aids from the government.

“Now, it has been eight years, and there is still no recruitment. It is because of the government’s apathy towards us,” said Pranit Basale, another diploma [D.Ed.] holder.

Verification process of the applicants has been wrapped up for a long time now. In 2014, the new government – led by Bharatiya Janata Party and Shiv Sena – took charge. The new education minister has reiterated the promise of recruitment for the seventh time since 2014. But the applicants and the opposition are now terming it a chunavi jumla.

The Education Department conducts two exams for the entrance and eligibility of courses D.Ed. and B.Ed – Teachers’ Entrance Test (TET) and Teachers’ Aptitude and Intelligent Test (TAIT). After clearing the TET, a candidate will be able to seek a job for up to seven years, under this eligibility. “I cleared mine in 2013. So, the next year – 2020 – will be my last year. But the government itself is nor recruiting. How will I be able to get a job before 2020?” asked Pranit.

The other significant issue was the roster or the Bindu Namavali, as it is called in Marathi. When teachers were recruited in the early 90s, they were given a form to fill their information. “That time, many people who were from the reserved categories, didn’t mention it there in form. They might not have had any certificate or whatever might be the reason. But therefore, there are no vacancies in the ‘open’ category for D.Ed. and B.Ed. degree holder,” said Asmita Rokade, a 25-year-old diploma holder from Pune.

However, the roster issue too is now under control. “There are only seven to eight districts left where the roster is not yet clear. So, government should now start the recruitment process. It is getting delayed unfortunately,” said Aaba Mali from Solapur district, who has been eligible since 2011.

Maharashtra’s Education Minister Vinod Tawde has again, on January 18, 2019, assured the candidates that the recruitment process will be completed before the code of conduct is imposed ahead of the general elections. Maharashtra government has issued a timeline as well for the recruitment. According to it, district education officers should have completed the roster by January 14. “Eight-nine districts have not completed this roster. So, the next step of cross-checking the roster, and uploading it has not been done. It was supposed to get over by January 17. This shows the delay in process,” said Pranit.

As per the timeline, the organisations including local governance bodies of Zilla Parishad (district councils) and Nagar Palika (municipal councils) should have given their advertisements for recruitments by January 22, 2019. However, the process is lagging behind.

Following the issue with the Bindu Namavali, the candidates from the open category fear that less seats will be available for them. “As of now, there are only a few vacancies. And the seats from the open category are already under question due to the issue with the roster. So, exactly how many seats will be available for the Maratha candidates? Maharashtra government has given 16 per cent reservation to Maratha community. So, will this16 percent be out of the total number of seats or from the fewer number of seats left after roster issue? This needs to be clarified before the recruitment process,” said Asmita Rokade.

Additionally, the union government has passed 10 per cent reservation for the economically backward class, which has further increased the confusion about the reservation in the recruitments.

Many other candidates feel that this could further delay the recruitment procedure.

“We think that the state government should start recruitment at the earliest. It can keep the required seats of quota unfilled until there is clarity. But other seats must be filled immediately. This has already got delayed way too much,” said Kalpesh Thakare, a diploma holder from Thane.

There are 1,78,000 candidates across the state. Out of them, 1,73,000 candidates have cleared the TET. As per a reply to an RTI from Directorate of Primary Education, Maharashtra, there are only 20,401 vacancies in state. So, about only one-eighth of the candidates will be recruited by the end of the process.

“Whatever is the number, at least that many recruitments should be done as soon as possible. We will then get to know our position, and we can then look at our options,” said Aaba Mali. In his words, the emotions of the candidates are summed up. They want clarity, whether job or no job.