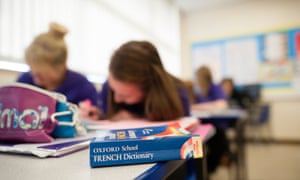 The education secretary is right that exams are “inherently stressful” – but for students taking a modern foreign language (MFL), the stress is disproportionate. They will have to sit excessively difficult exams and accept that their grade may well end up lower than their performance deserves. In a recent BBC survey, 76% of English schools reported that the perception of languages as “difficult” was the main reason behind the drop in pupils studying for MFL exams. Where’s the incentive to choose a language if you’re systematically made to feel rubbish at it?

National bodies ranging from the British Academy to the all-party parliamentary group on modern languages have called for action to address the languages crisis. Meanwhile Ofqual is killing off the subject in schools and universities by ignoring the evidence. Exams that are in some cases more difficult than first-year university language exams; severe and unreliable grading; and assessment statistics that take inadequate account of native speaker participation – these have long been critical in driving demoralised learners and teachers out of the subject. French A-level entries in England have plummeted from 15,000 to 8,000 in a decade, German entries are now under 3,000, and university languages departments are struggling or closed.