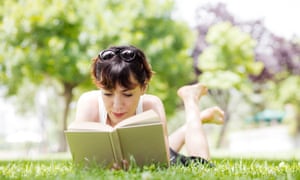 Sales of self-help books have reached record levels in the past year, as stressed-out Britons turn to celebrities, psychologists and internet gurus foradvice on how to cope with uncertain times.

Three million such books were sold – a rise of 20% – according to figures from Nielsen Book Research, propelling self-improvement or pop psychology into one of the fastest-growing genres of publishing.

“People come into the shop and they’re really fed up about things. They’re looking for reassurances and peace of mind, so self-help books have become incredibly popular,” said Paul Sweetman, owner of City Books in the seaside town of Hove.

In 25 years of business, Sweetman says he’s never known customers more in need of uplifting reading than they are now – a result, he believes, of the political climate both here and abroad.

Self-help books used to be something to smirk about, said Sweetman; now they’re a badge of honour and “as good to read as any novel”.

Marie Moser, owner of the Edinburgh Bookshop, agrees. “The new batch of writers are not getting all la-de-da about stuff like mindfulness and mental health – they’re saying this is why it works, this is how you can do it and this is my experience,” she said.

Moser believes the renaissance has been driven by word-of-mouth recommendations for books such as Chimp Paradox by Steve Peters – a sort of mind-management manual to help people become more confident.

Some of the biggest-selling self-help authors have built up armies of followers by being loud-mouthed and caustic. They’re easy to spot from the expletives in the titles, like Mark Manson’s The Subtle Art of Not Giving a F*ck. And some of them are by celebrities, including Russell Brand, Ruby Wax and Fearne Cotton, whose hot takes on how to be happy have boosted the category to £30m a year – a welcome fillip for hard-pressed independent booksellers.While the genre has tended to be more popular with women, Keira O’Brien, data editor at the The Bookseller magazine, said authors like Manson had successfully wooed a younger, angst-ridden male audience.

“It’s almost like male readers are looking for guidance or reassurance on how to be a man in a post #MeToo world,” O’Brien said. “It’s a noticeable skew which has never really happened before”.

Self-help themes are crossing into other areas of literature, too. Memoirs about mental health by Matt Haig and Rose McGowan, while not technically of the genre, have been hugely influential.

City Books’ Sweetman adds that nostalgia as a form of self-help is also big business. The new trend, he says, is for older people – in their 60s and 70s – to buy books they used to read when they were kids.

“They want something that’s safe and familiar, something where they know nothing nasty is going to happen”.

We made a choice…

… and we want to tell you about it. We made a choice which means our journalism now reaches record numbers around the world and more than a million people have supported our reporting. We continue to face financial challenges but, unlike many news organisations, we have chosen not to put up a paywall. We want our journalism to remain accessible to all, regardless of where they live or what they can afford.

This is The Guardian’s model for open, independent journalism: available for everyone, funded by our readers. We depend on contributions from our readers. Will you support our choice?

Readers’ support powers our work, safeguarding our essential editorial independence. This means the responsibility of protecting independent journalism is shared, enabling us all to feel empowered to bring about real change in the world. Your support gives Guardian journalists the time, space and freedom to report with tenacity and rigour, to shed light where others won’t. It emboldens us to challenge authority and question the status quo. And by keeping all of our journalism free and open to all, we can foster inclusivity, diversity, make space for debate, inspire conversation – so more people have access to accurate information with integrity at its heart.

Guardian journalism is rooted in facts with a progressive perspective on the world. We are editorially independent, meaning we set our own agenda. Our journalism is free from commercial bias and not influenced by billionaire owners, politicians or shareholders. No one steers our opinion. At a time when there are so few sources of information you can really trust, this is vital as it enables us to give a voice to those less heard, challenge the powerful and hold them to account. Your support means we can keep investigating and exploring the critical issues of our time.

Our model allows people to support us in a way that works for them. Every time a reader like you makes a contribution to The Guardian, no matter how big or small, it goes directly into funding our journalism. But we need to build on this support for the years ahead.