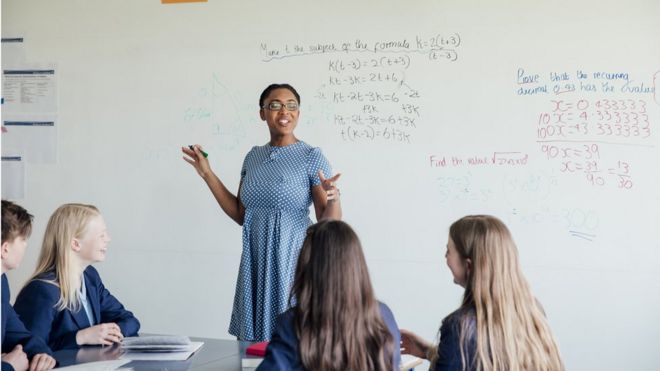 The Education Secretary, Damian Hinds, has signalled teachers’ pay in England should be capped at 2% next year.

In evidence to the independent School Teachers’ Review Body (STRB), he said 2% would be in line with projected inflation and affordable within schools budgets, set to rise 2.5% next year.

The joint teaching unions have told the STRB they want 5% across the board.

It must consider all the evidence it receives before making recommendations to the government in May.

National Association of Head Teachers general secretary Paul Whiteman said a pay rise of 5% was “vital if we are to plug the leaky pipeline of teacher recruitment and retention in England”.

“Following years of caps damaging to public sector pay, it is disgraceful for the government to impose another one, this time of 2%,” he said.

Last summer the Department for Education introduced pay rises in three bands, 3.5% for classroom teachers, and 2.5% or 1.5% for senior leaders, which, Mr Whiteman added, “delivered a pay cut in real terms for all but a third of teachers, including the most experienced staff and leaders”.

Association of School and College Leaders general secretary Geoff Barton said it was extremely disappointing that the government had said a 2% increase was affordable from school budgets when this was absolutely not the case.

“School funding per pupil has fallen by 8% in real terms over the past eight years, including cuts of more than 20% to school sixth-form funding,” he said.

And this has led to schools having to absorb a series of cost pressures without any more funding, leading to deficit budgets and cuts.

“To say that schools can now afford yet another unfunded cost pressure not only adds insult to injury but places educational standards at risk,” Mr Barton added.

“It would be yet another real-terms pay cut and would fuel the teacher supply crisis,” she said.

“The NEU’s survey of 34,000 teachers shows that 70% are already considering leaving the profession due to poor levels of pay.”

The Department for Education said: “Last summer saw the biggest teacher pay rise in almost 10 years, worth between £800 and £1,366 for classroom teachers and supported by a £508m government grant.

“Building on this, the education secretary has written to the independent School Teachers’ Review Body to ask its panel to provide its recommendations on teacher pay for the coming year.

“This sets out that a pay increase for teachers of 2%, in line with forecast inflation, will be affordable within schools’ budgets and will be supported by the government’s proposals to fund increases in teachers’ pension employer contributions from September 2019.

“The core schools budget will be 2.5% higher next year; teacher salaries account for around half of schools’ spending.”

2, at, be, capped, Government, pay, says, should, Teachers