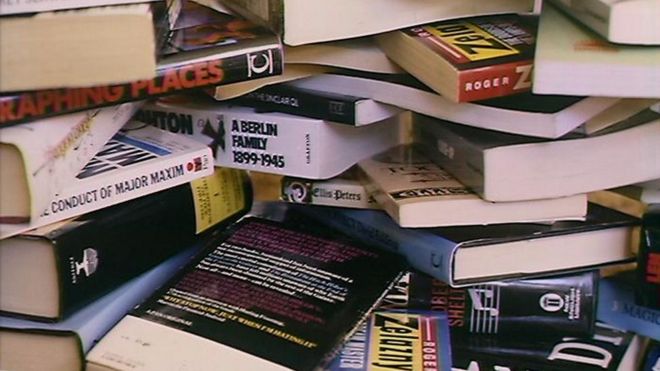 With a window stuffed full of paperbacks it looks like any other second hand book store.

Until you notice the sign above the door. “Books for Free”, it reads.

Thousands of tomes of every type line the shelves. Behind the scenes is a back room stuffed with many more.

Some mornings when the volunteers arrive at the shop in Newport, the floor is covered with donations that have been stuffed through the letterbox.

When bookworms first walk in they usually think there is a catch.

“A lot of people say they cannot believe it,” manager Kevin Hart, 63, said.

“They say they would love to have one of these where they live.

“They’re trying to open a few more but I do not know where they are going to be.”

Regulars pop in every day. There is a limit of three books a day, unless you make a donation. DVDs and videos are also available.

The store, at the Pill end of Newport’s Commercial Street, is run by the Global Educational Trust.

The idea is it stops books going to landfill and provides access for those that might not be able to afford them and it shifts one million a year.

“We get a lot of people who sleep on the street coming in here for books,” Mr Hart said.

“Some stay here for ages. They just sit down reading. We are like a drop in for some of them.”

Some customers travel from England.

Assistant Pietro Russo, 48, said: “We get a lot of people coming from over the bridge.

“They say the nearest place like this they know is in Gloucester.

“These shops are quite rare. They have not even got one in Cardiff. It’s quite an honour that we have got one in Newport.

“If they have got an empty shop unit they would rather there was someone in there other than squatters.”

Kayleigh Roberts, from Risca, was stunned when she first visited.

“I think it’s awesome,” the 32-year-old said. “Books are expensive. It’s a travesty that these books would have been going to landfill.

“I’m learning Russian so to be able to able to read Russian literature is hugely beneficial.”

The art dealer was “a bit overwhelmed” on her first visit but now goes in to find new books whenever she is in Newport.

“Everyone I have taken has been really impressed with it. Not many people seem to know it’s here because it’s quite out of the way.”

Lorraine Turner, an administrator at the Global Educational Trust, said the charity had run a similar store in Carmarthen for a number of years.

“We have to explain to a few customers how it works because people expect there to be a catch,” she said.

“We’re just happy the books are not going into landfill and we are promoting literacy at the same time.”