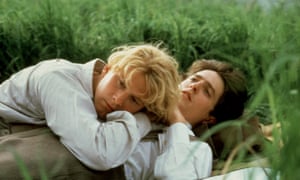 If the countryside appears at all in LGBT+ stories, it is usually only as somewhere to escape from. For many of us, this is a pattern that never fitted, and though we did the urban thing to burst (or tiptoe) from the closet, the lure of the rural soon overwhelmed the anonymity of the city. It didn’t feel like a choice, but something intrinsic that would have been dangerous to resist, like the act of coming out itself.

So it was for George Walton and Reg Mickisch, an elegant couple who met in the postwar rubble of London, and in 1972 headed for the sticks, opening a B&B in a tiny mid-Wales village. They became much-loved members of our thinly scattered community, and great friends. When they died within a few weeks of each other in 2011, aged 94 and 84, my boyfriend and I found that they had left us their old farmhouse. In us, they saw themselves, and the feeling was mutual. Their legacy was far greater than that though, for it included an archive of letters, diaries, photos, art and books that told a remarkable story. My book On the Red Hill is that story – and so many others.

In researching it, I read widely around the topic of the “queer rural”. There wasn’t much, at least not explicitly so. Even more than is normally the case with LGBT+ history, that meant learning to read the shadows, to spot fragmentary connections that had previously been denied or ignored. The truth was clear: we are not newcomers to the countryside. We’ve always been here. In Wales, there is a long tradition of yr hen lanc (literally “the old lad”), the unmarried uncle who might live with, or next door to, his equally unmarried friend. Every village had its hen lanc, and his female equivalents too.

These are some of the books that chimed most sonorously in my research. The queer rural is a small but growing canon, and I’m thrilled to be part of it.

1. Maurice by EM Forster
The gay grand-daddy of them all, Forster’s elegant love story was written in 1913, but – for fear of scandal – remained unpublished until his death 60 years later. Maurice and gamekeeper Scudder’s passion is ignited in the pillowy folds of a rural English landscape, a place of both beauty and danger. For middle-aged gay men like me, the 1987 film adaptation was a huge catalyst in our coming out – and surprisingly sexy, too, for a Merchant Ivory number. “Men of my sort could take to the greenwood,” sighs the eponymous hero; we all sighed with him.

2. Conundrum by Jan Morris
The groundbreaking 1974 memoir of her transgender journey is a masterpiece from the greatest literary traveller of our age. There is a literal journey, its apex on a surgeon’s table in Casablanca, but an existential and spiritual one, too, that brings her back to the only place that can possibly heal her, “the profoundly civilised society of Caernarfonshire”, in Wales’s rocky north-west corner. And there she is still, well into her 10th decade.

3. Edward Carpenter: A Life of Liberty and Love by Sheila Rowbotham
In truth, the copious written works of early socialist Edward Carpenter (1844 – 1929) have not aged too well. More inspiring is this superb biography of the man himself, and especially of the decades he spent living quite openly with his lover George Merrill in the village of Millthorpe, south of Sheffield. Pilgrims came from far and wide, including EM Forster, who credited a bottom-squeeze from Merrill as the thing that freed him – it “touched a creative spring” – to write Maurice.

4. Stripping Penguins Bare by Michael Carson
In the second book of the Benson trilogy, set in the mid-1960s, our upright hero leaves Merseyside for university in Aberystwyth. There, he fights prejudice on behalf of the Overseas Students’ Society, while pining unrequitedly for one of its members. He has more luck with taciturn Welsh farmers, who happily deflower him in the wild west.

5. Fingersmith by Sarah Waters
Briar House, fog-bound in the Victorian English countryside, is the claustrophobic setting for this arch lesbian mystery story. At Briar, darkness and quiet rule, time moves differently and ordinary rules are upended. For all its clamminess, Briar insinuates itself into the hearts of the two women whose passion is ignited there. Though this countryside is heavy with secrets, it is only there that they can be themselves, and be together.

6. On the Black Hill by Bruce Chatwin
The furzy Welsh-English borderland is the backdrop – and chief protagonist – of this epic saga of farmer twins Lewis and Benjamin Jones. Benjamin is not the marrying kind, and Lewis gives up his own hopes of marital fulfilment to stay with him, sharing a bedroom that was “always dark, and smelled of lavender and mothballs”. In many ways, the twins represent Chatwin’s own bisexuality, and the farm bisected by the border his equally divided sense of where he felt he belonged.

7. Modern Nature by Derek Jarman
A place of pilgrimage for all queer ruralists is Dungeness, that otherworldly protuberance from England’s south coast and home, for his final years, to Jarman. At Prospect Cottage, he cultivated a garden as strange and spiky as its surroundings, the backdrop of a nuclear power station only augmenting its bleak allure. One unique property of Dungeness is its lack of fences; “my garden’s boundaries are the horizon” wrote Jarman in this passionate evocation of finding the wonder in wilderness.

8. A Place Called Winter by Patrick Gale
A muscular tale of escaping shame and demons in Edwardian England by becoming a prairie settler in Canada. The joyous Francis Lee film God’s Own Country was not, as many lazy reviewers had it, a British Brokeback Mountain. This is. The lesbian equivalent, a book that has bewitched its fans for 50 years, is Isabel Miller’s Patience and Sarah, the tale of two women who take on a farm in upstate New York at the beginning of the 19th century. We all need our cowboy/girl stories.

9. Blossom at the Mention of Your Name by Fiona Cooper
A book that shone a piercing light ahead for me when I first read it 25 years ago. I ached to be – or perhaps to be with – its central character, an elfin queer witch by the name of Callum. His connection to the green fuse of nature, so fulsomely explored and flamboyantly described, is a force that thrilled me, and only sharpened my hunger to get out of the city.

10. Sacred Country by Rose Tremain
Rural Suffolk in the 1950s was not the ideal time or place to be trans. Mary is six when she first realises that she is a boy, a growing understanding that propels him to sanctuary in London and then to Nashville, where he can live as Martin. Though this might seem like the standard queer “escape from the country” narrative, Martin can never quite shake off Suffolk village life, nor does he really want to. On boarding a Greyhound bus in Tennessee, the driver asks him where he wants to go. “Fields,” he replies.